Last week, Netflix decided to have some holiday fun courtesy of its user data. So the streaming service took to Twitter to pose the question, “To the 53 people who’ve watched A Christmas Prince every day for the past 18 days: Who hurt you?”

The tweet was meant to be an entertaining jab at a cheesy holiday film that the company released last month. But while many saw the humor, others were creeped out by the specificity of the information, with some complaining that Netflix appeared to be using its data in a flip manner that mocked some customers. It’s no secret that companies, especially those born in the digital age, are amassing deep and detailed troves of information on the habits and preferences of their consumers. For streaming services, that data fuels the recommendations. But companies are also taking a bit of a risk when they turn those findings into marketing, whether through conversational social media posts or advertisements from Spotify with lines like “Take a page from the 3,445 people who streamed the ‘Boozy Brunch’ playlist on a Wednesday this year.”

A message that one person might see as clever and unexpected can just as easily be seen by another as an ominous reminder that Big Data is often lurking just around the corner.

“This gives the public a kind of view into the ways that the major content companies are gathering and using our data,” said Jeffrey Chester, head of the nonprofit Center for Digital Democracy, which advocates for consumer protection and privacy. “Behind the ease of being able to access video and audio content are very sophisticated customer surveillance and analytics applications, and there’s nothing funny about that.”

Others scoffed at such concern last week, saying Netflix’s joke was harmless and noting that people were complaining on a social media platform that engages in similar data collection practices. Spotify is in the midst of its third ad campaign featuring tag lines rooted in highly specific listener data. (Indeed, several people called Netflix out for seeming to copy Spotify with its post.) The music streaming service recently bought ads on billboards and buildings with a marketing message built around the theme “2018 Goals,” with cheeky messages that sometimes have a political bent. 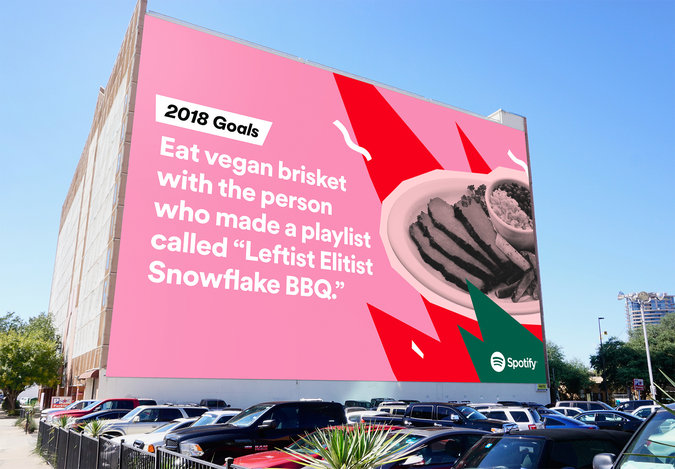 “Deliver burns as well as the person who streamed ‘Bad Liar’ 86 times the day Sean Spicer resigned,” one proclaims. Another says, “Eat vegan brisket with the person who made a playlist called ‘Leftist Elitist Snowflake BBQ.’”

Spotify ran a similar campaign last year, bidding farewell to 2016 with messages like “Dear person who played ‘Sorry’ 42 times on Valentine’s Day, what did you do?” One message even referred to a specific Manhattan neighborhood: “To the person in NoLiTa who started listening to holiday music way back in June, you really jingle all the way, huh?” The company said this year that it had more than 140 million regular users, with 50 million paying for monthly subscription plans and others using a free service that comes with targeted ads.

Spotify’s marketing executives said last year that they avoided lines that appeared to be laughing at people’s habits in favor of those that celebrated unusual behavior. They also said they sought permission from people when using their playlist names in ads. The people were usually delighted to be asked, the executive said, who noted that the data collection wasn’t a surprise given that that’s how Spotify provides users with its weekly recommendations and year-end lists.

People and publications such as AdWeek and AdAge called the campaign “amusing,” “playful” and “hilarious.” While that has largely continued this year, there has also been criticism that some of the messages veer too close to making fun of users.

And the Netflix hubbub didn’t seem to help. Netflix, which has more than 100 million members, emphasized that the use of data to better serve users was a main part of its business and that its behavioral data was collected anonymously.

The company has frequently shared interesting information about viewers’ habits in the past, said Jonathan Friedland, a Netflix spokesman. But he pointed out that Netflix does not use customer data to sell ads on its platform, as Google and Facebook do, or sell it to other entities.

Tidbits on Netflix viewing habits are “fascinating to people,” Mr. Friedland said. “It’s not like you’re breaching anybody’s privacy, because the core proposition here is we know you and try to put the right” films and TV series in front of you.